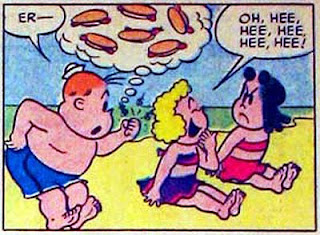 Steve Bissette reports that Irv Tripp, who worked on the vast majority of Little Lulu stories, has died at the age of 88 in Haines City, Florida. He did finished pencils and inks over rough layouts by  John Stanley until 1959, then worked with other writers, notably Arnold Drake, until 1982. Like Stanley, Drake also did his scripts in the form of fairly detailed breakdowns-- I don't know if Tripp's other collaborators worked that way or not, nor can I  say for certain if he ever wrote any Lulus himself. I expect that Frank M.Young will probably have more to say abou Tripp soon at the always great Stanley Stories blog. Here's the local newspaper's obit, and here's Lambiek's Comiclopedia page. Regrettably, he doesn't seem to have ever been interviewed any where I know of, though I'd love it if someone could prove me to be a liar on that count.
Posted by Devlin Thompson at 3:49 PM