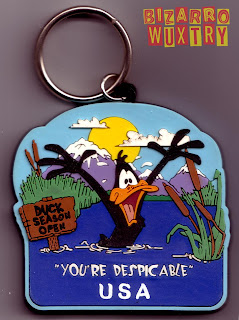 Hey, Rush Limbaugh! Quit crying about Sean Penn and Tim Robbins and the Dixie Chicks! If you want to complain about America-haters in Hollywood, it's time you went after Daffy Duck! Plenty of his Warner co-stars like Blackwater CEO Yosemite Sam and NRA spokesman Elmer Fudd are longtime Republican supporters (I've heard rumors that Fudd was the actual gunman in the old man face-shooting incident, but Cheney covered for him), but let's face it... this guy ain't gonna be a guest blogger at Big Hollywood anytime soon with this attitude!

For the record, this is a real, officially sanctioned, fully licensed product, © 1996 Warner Bros. and I haven't fiddled with it at all beyond the watermark.
Posted by Devlin Thompson at 2:21 AM

I have had my suspicions about Mr. Duck ever since he did that Vaudeville act / flag burning tour with Ward Churchill