Over at Misce-Looney-ous, Jerry Beck has been asking for info on some Looney Tunes cards apparently included in packages of Wonder Bread in 1974. He's got five, and he'd like to know the total number in the set, and any other info anyone might be able to offer. I can't say how many there are, but I can make it all a bit more mysterious. I have two; this one: 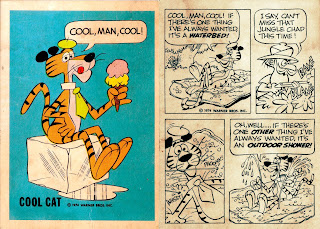 ...and, surprisingly, this one: 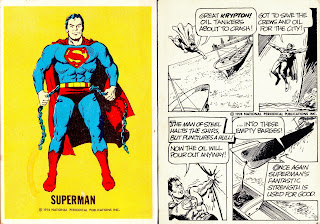 While it's certainly true that these were both in the category of "Things that are owned by Warner Communications, Inc.," such commingling of their properties was pretty unusual at that time. I got this card maybe twenty-five years ago and assumed it was part of some unknown set of DC cards until a few years ago when I found the Cool Cat card. I'm still not ruling out the possibility that these were just two different sets issued the same year, but they certainly seem to be part of the same thing. The lettering matches, and the artist here is clearly not accustomed to drawing superheroes (I like the way that Supie looks like Victor Mature). So... that's all I have to add to the puzzle. Anyone else want to chime in?
Posted by Devlin Thompson at 12:11 PM 9 comments: