One of my other internet timewasters is Early Works,  a blog presenting my artwork between the ages of two and fourteen, with commentary. But I've got skeletons from other closets beside my own... and this is one that I haven't seen in anyone else's blog or fanzine, so it should be a surprise to the vast majority of you. 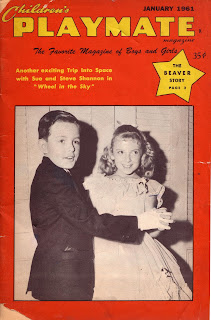 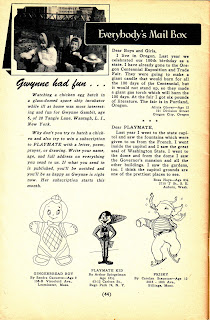 Children's Playmate was a digest-sized kiddy magazine in the same vein as Humpty Dumpty, Children's Digest, and Jack and Jill that dated back at least to the '30s, and lasted until December 2008, as best I can determine (there's not a lot of concrete information about it out there). All the issues I own are from the late '50s-mid-'60s range, and they're all pretty charming, if a bit restrained and cheap-looking. Every issue I've ever seen also looks like it probably seemed about ten years behind the times upon its initial release. Apart from a lot of (once again, very retrograde) art by Bill Woggon, done in the period between Katy Keene and Millie, The Lovable Monster, there's not a lot of appealing illustration  in these to speak to the modern comics fan... that is, except for the January, 1961 issue. Let's take a closer look at that readers' art page, shall we? 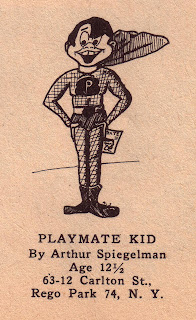 Well, whaddaya know? it's a superhero mascot, designed by future Pulitzer winner/chain smoker Art Spiegelman! I find it interesting that he gives his age as 12 1/2-- my first impulse was to think "what kind of sissy cites a fractional age past the six-year old point?", until I realized that it was actually because he realized that he was about to age out of eligibility for his target market. He wasn't fudging it, though... he wouldn't turn thirteen until a month after the cover date. Pretty savvy self-promotion, actually. I also found it interesting to see how much the young Spiegelman's work resembles contemporaneous work by the Crumb brothers or Jay Lynch , but that's mostly just because they're all shooting for the same Disney/Wally Wood look, in the same way that Toth, Kubert, and Infantino are near-identical in the '40s... or the way that Gerald Scarfe and Ralph Steadman are a matched set of Ronald Searles in the mid-'60s. Young Artie would continue in his attempts to tailor his work to the venue in what I believe is his second national publication, about two years later... but you'll have to wait a little while to see that one! Stay tuned... 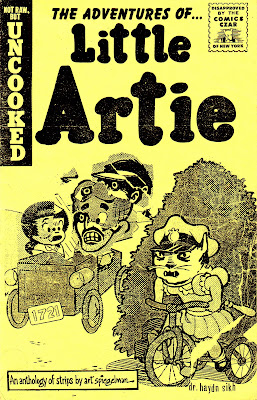 You can find both of the Spiegelman pieces cited here reprinted, along with a batch of early underground stories (some, but not all of which were since included in the new edition of Breakdowns) in this obscure bootleg collection from several years ago, published by someone purporting to be the reanimated corpse of schlockmeister extraordinaire Myron Fass (even though the real Fass wasn't quite dead yet!). I'm pretty sure I know who "Fass" really was, but I'm no stool pigeon, copper! Good luck locating it, though... I think that there were only maybe 50-60 copies.  I heard that one copy got slipped into a display case at a gallery show of Spiegelman's work in Germany, somewhat confusing the patrons.
Posted by Devlin Thompson at 3:00 AM

Great Blog!You have mentioned very useful information .And Thanx for giving me good knowledge.I visited a site before in that there are a lot of collection available for flag display cases and
Memorial Flag Box.You can also visit that site for more knowledge

At Bizarro-Wuxtry, it is a key part of our mission to "give good knowledge", without expecting any "thanx", to all and sundry, even spambots.Thanx to you for your interest, Freedomdisplay. Now buzz off!