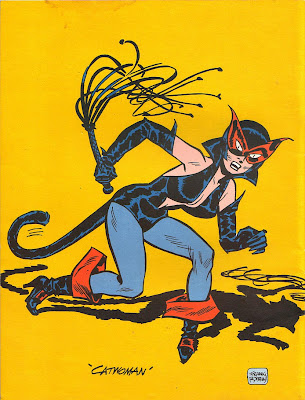 If you were an action-figure-buying child in the mid-'70s like myself, you were probably a bit confused by your Mego Catwoman, wearing an outfit that, while it kinda looked like the TV version, resembled neither her contemporary look nor her appearance in any of the variety of reprints available at the time. I would eventually stumble across back issues with this short-lived outfit, as well as its immediate predecessor, which was even more TV-like, but all green, for whatever reason, but it was only recently that I acquired Amazing World of DC Comics #4, whose back cover features the above image, along with the news that said outfit was in fact a Frank Robbins creation. Incidentally, the Mego Museum tracks the art on the Mego package to a panel in Batman #210, but that panel seems to have itself been closely modeled (read: "swiped") from the design sketch. So, was the Mego design department working from the comic, or a stat of this image? We'll probably never know, and I suppose that it doesn't particularly matter. 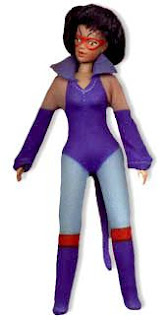 (Image stolen from the Mego Museum link above.)

Posted by Devlin Thompson at 8:01 AM