Here's a short clip from a 1956 British Pathé newsreel featiuring Frank Hampson in his studio with  some nice shots of his models and the elaborate costumes and props used, as well as dubious footage of him drawing a page: 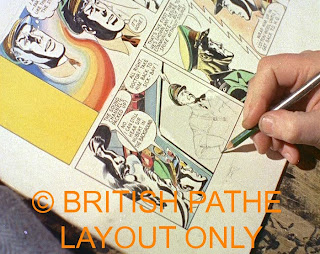 I'm not that familiar with his studio's elaborate process, but I question the likelihood of an already inked and partly-colored page still needing pencils on any part of it (not to mention that he's apparently drawing on an overlay!)*. Still, phony "action shots" constitute a large percentage of the photographic record of cartooning, so it's not too surprising. Still cool, though.

*The one possible legitimate reason would be if he were making a last-minute correction to be pasted up, but I don't believe that's what's happening here.
Posted by Devlin Thompson at 9:03 AM