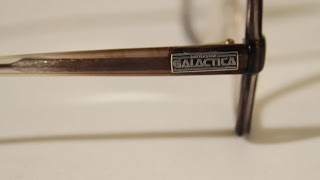 So... I was reading about these Battlestar Galactica eyeglasses at the National Museum of American History's blog, and while scrolling down through the comment section, I ran across a painful-but-amusing anecdote about the writer's adolescence in Omaha, Nebraska. As it turned out, that miserable eighth-grader was none other than Mr. Franklin Christenson Ware, himself! Here, go see for yourself! A short follow-up may be found here. For the record, my comment on the posting was this:

"Those same spring-hinged glasses had been offered previously with a "BIONIC" nameplate (which I had, not because of the Six Million Dollar Man's implied endorsement, but because I was breaking my frames 3 or 4 times a year, and the springs made them slightly less destructible). Both shows were made by Universal Pictures, so it was presumably an easy transition between licenses.For the record, mine definitely came from Pearle Vision Center."

I went hunting to see if I could find the patent for the spring hinge, but without success. There were a fair number of similar ones, but none that matched well enough that I felt certain they were the origin of these. Sorry... I tried!

Posted by Devlin Thompson at 9:42 AM


Hi there just wanted to give you a quick heads up and let you know a few of the pictures aren't loading properly. I'm not sure why but I think its a linking issue. I've tried it in two different internet browsers and both show the same outcome. hotmail login