Go Look At This Obscure Monkees Comic! Then Come Back And Let Me Tell You Something About It!

So... Mr. Al Bigley, noted comics artist and enthusiastic blogger, posted this two-page Monkees strip by Steve Skeates and Jim Aparo yesterday, along with his suppositions as to its origins. While his theory was perfectly reasonable, it just didn't quite seem right to me. Why would a parody comic like Go-Go publish a straightforward, seemingly-authorized story about a group that already had a licensed comic from Dell (also a short-lived Brazilian edition)? Admittedly, Charlton Publishing had pulled a lot of shady hijinks through the years, all the way back to its origin as a publisher of unlicensed music lyric magazines (for which founder John Santangelo did prison time). Still, poaching in Dell's territory that blatantly would just be asking for trouble. 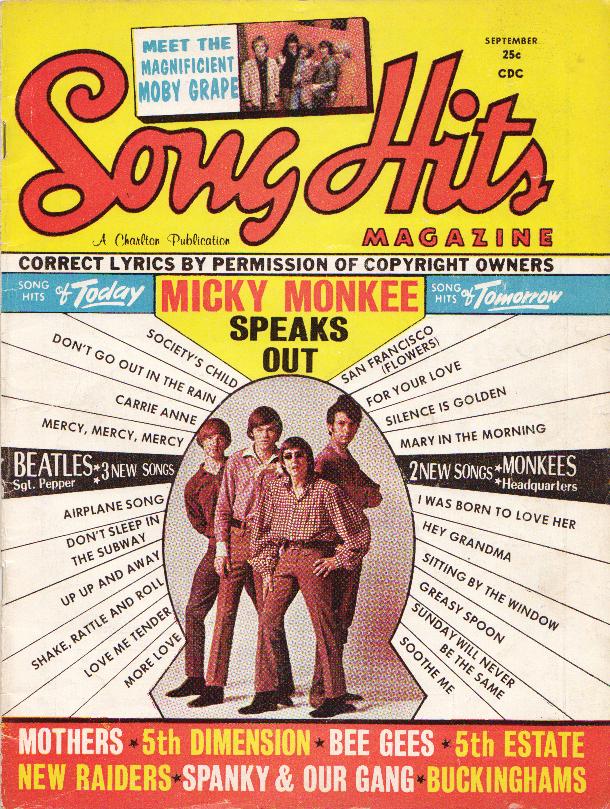 While it started out as a criminal enterprise, this one's (presumably) legit(-ish)

It occurred to me that, while Mr. Aparo sadly can no longer be reached for comment without resort to a Ouija board, I might be able to inquire of the still-very-much-with-us Mr. Stiles, and he very graciously responded thusly:


Lemme tell yuh, doing that piece was indeed a lot of fun writing-wise, and it did get published -- in an issue of a black-and-white Charlton publication entitled Teen Tunes and Pin-Ups! What rights had to be secured and whether they actually were or not I have no idea, but the story was part of a contest! I had to hide the names of various Monkees songs in the dialogue of the story and the readers as contestants had to count those up and send in the number of them, whereupon there would be a drawing from those who got the number right so that some sort of prize could be awarded! It wasn't exactly easy hiding all those song titles in there, yet as I recall I got paid the usual Charlton writer's page rate of four bucks a page; in other words, eight dollars for the whole deal!! Hey, I was young and innocent, and didn't mind that at all!

Using that info as a new starting point, i was able to find my way to The Jim Aparo Fan Club blog where I learned that this was the last of three Monkees stories by Aparo (one) (two) (three) that ran in Teen Tunes in issues 3-5. Mr. Gallaher of the Aparo blog makes the assumption that the Monkees license at this point passed on to Dell Publishing, but from what I can piece together, that's not actually the situation. There's not a lot of info available concerning Teen Tunes and Pin-Ups (not to be confused with the more frequently-encountered Teen Pin-Ups), but from what I do know, #4 and #5 are dated January and April 1968, respectively, and one may extrapolate from this that #3 is likely cover-dated October 1967cover-dated November 1967. I know for certain that the first issue of the Dell Monkees comic bears a cover date of March 1967, and it runs continuously at either a bi-monthly or monthly rate (though erratically, and with the indicia frequently claiming a quarterly frequency!) until November 1968, then popping back up for one last issue (reprinting the first one), dated October 1969. In light of the overlapping publishing dates, one must assume that black and white teen magazines were treated as a separate licensing category by Raybert Productions. Other unrelated Monkees comic product of the time period include comics by Gene Fawcette and Howard Liss in a paperback just called The Monkees (link is to the UK version), ones by Bill Kresse in Monkees Go Mod, and spot illos by Jack Davis in Love Letters To The Monkees, by the inescapable Bill Adler. The Dell comic books were written by person or persons unknown, and drawn by journeyman artist José Delbo (who has frankly done much better work elsewhere;  to be fair, though, nobody at Dell was exactly bringing their "A" game in those last few declining years).


Thanks again to Steve Skeates for his gracious response to my inquiry. Check out his newest work in All Surprising Comics, coming soon from Surprising Comics.
Posted by Devlin Thompson at 9:00 AM