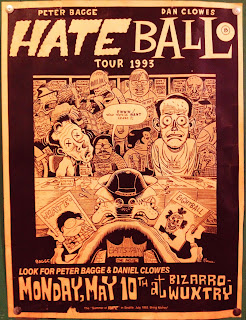 Today marks the twentieth anniversary of the day we played host to comix legends Peter Bagge and Daniel Clowes as part of their Hateball Tour, so what better time to dip into the Bizarro-Wuxtry Archive's vast holdings and share some precious memories? First up, a trio of photos made using the "Bizarro-Wuxtry Monkey Cam" (i.e. young Diego Aloysius Kirsch, our Official Teen Sidekick, climbing up to the top of some rickety shelves with a camera): 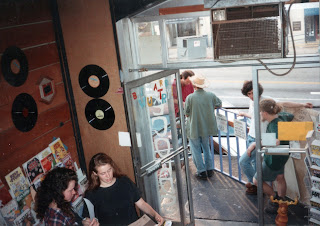 As well as doing tons of sketches and autographing all manner of comics and album covers, the guests of honor were called upon to autograph local artist/musician/elemental force of nature Deonna Mann. Please note that these shots were taken per her request, and I was not just being a perv. 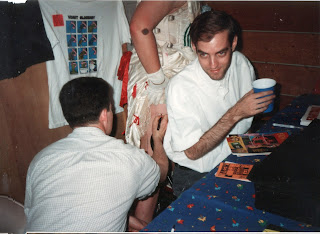 Speaking of Ms. Mann, she also provided a puppet show in honorof our special guests, with music by her musical organization, the Medaglia D'Oro Orchestra. The police pointed out that no permit for such a performance had been issued, but we worked it out. 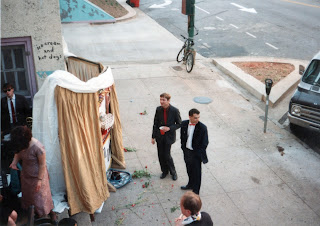 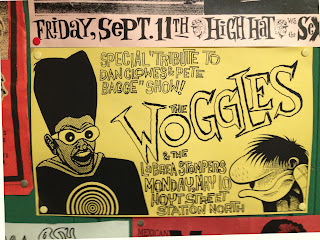 That evening, there was another concert in their honor, at the long-defunct Hoyt Street North club, featuring the Woggles and the La Brea Stompers (whose own poster for the event can be seen in the ninth and tenth photos above). Regrettably, my camera was suffering from a light leak, and most of the photos were ruined, including all the photos of the Woggles, except for this candid photo of the late, lamented George Montague Holton. 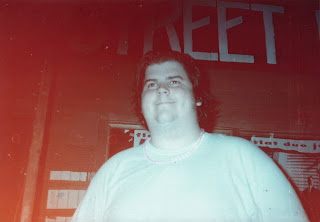 I was, however, able to salvage a few photos of the Stompers' set. Their drummer, Richard E. Grant, isn't visible in any of them, but he looks just like this guy, except not horrible: 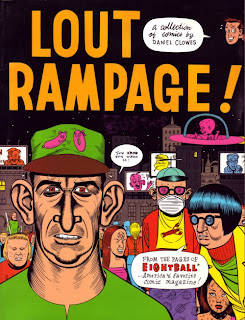 Anyway, here's what I do have:


Later that year, the Stompers would commission an album cover from Clowes for their album Funzo's Knuckle Room, seen here in the highest quality image I could find (I never got a copy myself because it was only on CD). 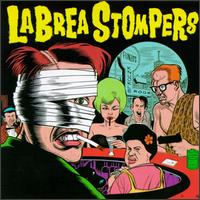 The next day, we gathered up our VIPs and carried them to their next stop, Criminal Records in Atlanta. To build up their stamina, they finally dug into Karen's eyeball cakes. 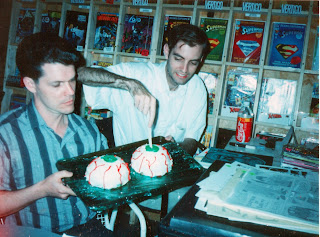 While we've had plenty of signings before and since (it's crazy to me to think that this was only three weeks after Evan Dorkin & Sarah Dyer came to the store), this was the biggest and best, and there's no way it would have happened without the hard work of my co-manager Shannon T. Stewart, the aforementioned Mr. Kirsch, Eric Levin at Criminal (we split the cost to bring the guys in) and all the folks in the bands, to whom I'm eternally grateful. Maybe we'll see if we can do it again for our Silver Jubilee.
Posted by Devlin Thompson at 11:47 PM

Man, what is up with Peter Bagge?? He looks like he can't be bothered, wearing his sunglasses indoors--but at least Clowes looks like he's havin' fun. Nice shot of Jeff Johnson and Dee!

...and to think I was there! Great seeing you and Athens today, Devlin!

Great photoset ! So may oddballs. Thank you for sharing.