Superman Vs. The Cyclops 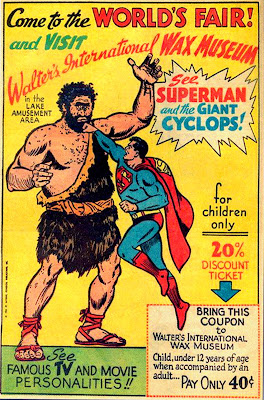 If you're anything like me (and I suspect that you aren't), you're intimately familiar with this ad that ran in all DC books in 1964. I've probably got 8 or 10 copies of it in one comic or another. I wondered for years what exactly was being advertised, but I assumed that I'd never see it. Of course, sometime in the intervening years, they invented the internet, and, more specifically, they invented eBay, and a saved search therein eventually brought me the answer to my quest, though it took nearly a year. Because I am a good and generous man, I'm sparing you my arduous search. 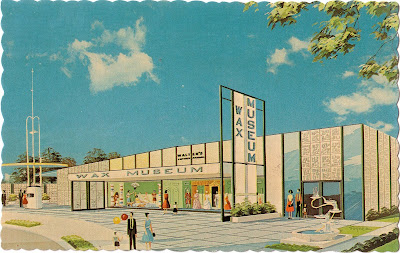 This postcard shows us Walter's International Wax Museum (and the back informs us that Marge, Liz, & Mel visited it in August 1964), located in the Lake Amusement Area of the New York World's Fair. I'm not certain if the Walter brothers ever had a stand-alone museum, but they had previously operated the Paris Spectacular Wax Museum at the 1962 Seattle World's Fair. The museum had a variety of exhibits of historical figures, religious tableaux, movie and TV stars (including some frightening Beatles with Ed Sullivan, and a Robin and the Seven Hoods window display!).But more importantly, they had this: 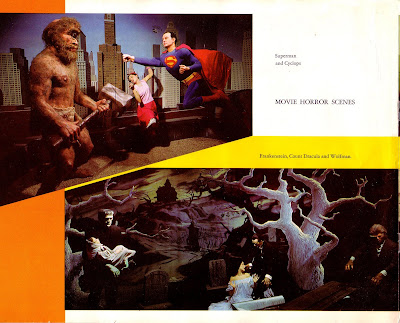 Here's a closer view for you: 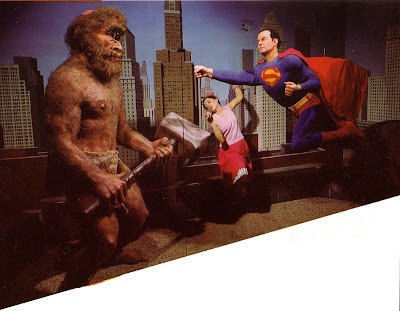 It's a bit underwhelming, but the Cyclops himself is pretty swell. I can't help but wonder if he'd been prepared for a mythologically-based display, and then conscripted to fight Supey (like the wax museum in Helen, GA we visited that had a display of a 19th century general store, one of whose occupants was unquestionably Gerald Ford in a new change of clothes). I guess they're shooting for a vaguely George Reeves-ish appearance, though Lois doesn't look like Noel Neill nor Phyllis Coates. Superman's hair seems to be an uncharacteristic texture, but it's hard to say for sure from the photo. I thought for a moment that maybe they were supposed to resemble the stars of It's A Bird, It's A Plane, It's Superman, but a quick search determined that the musical didn't open until March 1966.
By now I've seen the cardboard submarine,the Giant-Size Moon Monster, I own some of the 100 pc.Toy Soldier Set and a Gigantic Frankenstein poster (scroll down a ways), and I finally got the record that Bob Kane co-wrote by Hank Leids and his "Bat-Group" Courage (stay tuned to this blog for that little gem, eventually), so this was my last major comic ad mystery. It's a good thing that I have a near-infinite number of interests, or I'd be kind of bummed out. Still... tomorrow is another day!
Posted by Devlin Thompson at 2:15 AM

THAT... is the coolest thing ever. What a find. It reminds me of a viewmaster diorama or something.


I'm going to check back daily!

Thanks,
Batfatty (starting my own blog soon, too!)

You never cease to thrill land amaze. From the right angle, it looks like Supes is knocking Lois off the building with his flight! Great stuff, keep up the good works, and some the Monsters in a close up and link it on the UMA, por favor. Talk soon. sts

One of the TwoMorrows publications ran a story on this in the last 2 years! I think you could pose for a picture in the spot "Lois" is in....The article had several pics from the author's trip to the attraction then!

Funny... I usually at least flip through ALTER EGO and BACK ISSUE before I put them out (I only occasionally feel the NEED to own them these days, though THE JACK KIRBY COLLECTOR always comes home with me), but I guess I missed that one. Well, if I don't have a scoop, at least I have the capacity for color. That's something, right?

I'm ashamed to say I don't recognize the ad. (most of my comics don't go back quite that far.) It feels so strange to see and ad for the first time and immediately see what it's all about. The instant gratification is nice, but I miss the thrill of the hunt. I'm glad that you got to experience all of that.

This really is amazing on so many levels. I love it. Great detective work and thanks for sharing!

This is very cool. Although I have to agree Superman's hairline is a bit off putting. Also looking at the shot the shot the right way in a sort of forced perspective manner it kind of looks like Superman just slugged "Lois".

Since this post has gotten a bit of attention thanks to Kirk linking to it, a look back over the comments prompted me to investigate Mr. Bigley's assertion, and I've determined that the story he's mentioning was in BACK ISSUE #23, from August 2007. Checking our backstock, I found that our copy for the rack had never sold, and was thus available for perusal. The photos in question were provided by none other than the great Bob Burns himself! There are three snapshots, two of which are similar to the ones in the booklet, but the other one is taken from behind Superman, and shows a full-frontal view of the Cyclops, which is pretty great. The curious are directed to go to
http://twomorrows.com/index.php?main_page=product_info&products_id=574

for purchasing info. It's also possible that the PDF version might have the photos in color (I've ead that more recent ones at least are done that way), but it doesn't specify.

DUDE! You have "Have Faith In Me" by Hank Leids and the "Bat-Group" Courage? Any chance you'd post an mp3?

Oh, it's coming all right! But you may not like what you hear...

Maybe I'm crazy, but that looks like the slightly modified head of a young Richard M. Nixon. The hairline and texture is dead on for Nixon of the 1950s.